How can Transactional Analysis help in an asylum search centre? 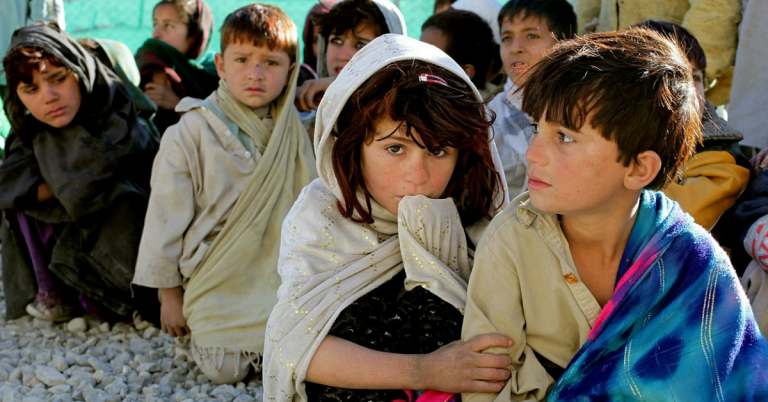 During one of my training days I met Karl. He is a young man of 24 who works in an asylum seekers centre. That’s not always easy. The people who apply for asylum are traumatized, fleeing from something and have to leave everything behind. Communication is difficult, not only because of the regular language barrier, but also because of the differences in culture and education. Karl would like to know how he can use Transactional Analysis to understand these people better and to help them to integrate.

There are a number of Transactional Analysis (TA) principles that can be valuable in this situation when properly implemented. In this blog I want to explain some of these elements.

All people are okay

By applying TA, you assume that all people are ok. It’s very important to take this position in this case, because it prevents you from judging asylum seekers and the way they react. By seeing all people as equals you can move beyond these judgments. It helps you to understand the decisions and actions of people, without having to agree directly with them. Starting from the principle that all people are okay, you can step back and look at the bigger picture.

In Karl’s case, by applying this TA principle, he can understand better the asylum seekers with whom he comes into contact. It also helps Karl to look at himself when he becomes impatient and frustrated or powerless. Karl must work within the constraints of policy decisions that he doesn’t always fully support.

Everyone can think for themselves

What a caregiver, like Karl, can easily lose sight of in this situation is how incredibly strong and courageous an asylum seeker must be to make the decision to leave their own country. The story behind these people is often forgotten.

The situation that arises is an unbalanced relationship. The official places them self above the asylum seeker and everyone seems to believe that the healthcare provider knows what is best for these people. The asylum seeker adapts to this idea and begins to believe that the helper is right. If the counsellor’s advice then does not appear to work, the healthcare provider becomes angry and accuses the asylum seeker of not listening properly. If the official helper realizes that his advice may not be appropriate for the situation of the client, he finds it difficult to accept.

TA offers a beautiful model – Karpman’s drama triangle – to invite the client and the counsellor to get out of this unbalanced relationship. This model depicts the imbalanced relationship beautifully: The bottom point is the client who plays the victim role. From this position he begins to complain and expects a solution to be offered by the healthcare provider. In the top right point is the ‘Rescuer‘, the person who always supports everyone and who puts their heart and soul into the business, for whom nothing is too much to ask. But in the meantime, he sees the other as a Victim. In the upper left point we find the “Persecutor“, the person who assumes that he is always right and not willing to ask for advice. Instead, he blames the asylum seeker when things go wrong. 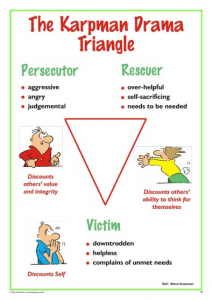 The Drama Triangle offers a reality check and reminds you that you communicate best from your Adult postion. By confronting the role you take in the triangle, you can decide to step out of the drama. From this new perspective you can open a conversation and find a solution.

Karl is at the top of the triangle. As soon as he realizes this, he can go to the asylum seekers in a different way and really listen to what the other needs. He then addresses the needs of the asylum seeker instead of thinking about what he considers necessary. By not only asking what the asylum seeker needs but also what he could do to improve his situation, he gets a better idea of ​​what assistance is really needed. He also gets a realistic picture of what he can do without overestimating his time and resources. The fact remains that he has to work within the constraints of a political policy, even though he doesn’t always agree.

What’s important for Karl to remember is that he can show understanding, but doesn’t need to make any promises. If an asylum seeker indicates that he needs a house and identity papers, Karl is not wise to say that he can arrange this. By staying honest with oneself and with the other, a bigger drama is avoided.

We can all revise decisions

It is in all our abilities to make decisions. We can all do that. Based on our circumstances, we can make a survival plan and act on it. Karl will not agree with all the decisions of asylum seekers from his position as a relief worker. This is because he judges these decisions from his own thinking and culture. In order to truly understand and help asylum seekers, he will need to learn more about the culture in which they grew up. He will also have to be willing to reflect on his own thinking framework. A few examples:

For Karl this is the key to good integration assistance. On the one hand, he understands what situation the asylum seeker comes from and which thinking patterns belong there. On the other hand, he also reflects on the constraints he is facing. From this understanding, open dialogue from mutual respect is possible. Karl then appeals to the thinking ability of the asylum seeker. The more this person understands what’s expected of him, the better the integration.

Transactional Analysis offered Karl valuable ways to deal with this difficult situation. During his training, he learned how to communicate with asylum seekers as equals. This helps him do his job better.

Are you curious about what TA can mean to you? Then I invite you to a test lesson. During this test lesson, you will get acquainted with Transactional Analysis and we will go deeper into ‘giving different attention in various ways’. You are welcome.

Yes, I will come to the trial training